In this article I investigate the computational performance of various string concatenation methods in the Go programming language.

To evaluate the options, I prepared some typical Go benchmarks using the Go testing package. A benchmark looks something like this:

For the purposes of these benchmarks, I imagined having a process that returns string segments one by one, and these segments need to be concatenated to form one string. To represent such a process, I created a simple iterator that returns the string version of its current index on each call:

Every method we evaluate will call this function in a loop so that the fully concatenated string looks something like 0123456789101112131415.... There is function call overhead to take into account in this, but since all the benchmarks will have the same overhead, the comparison is still fair. Now that we have the basic setup for the benchmark, let’s see what the methods are we’ll be evaluating.

This is the most obvious approach to the problem. Use the concatenate operator (+=) to append each segment to the string. The thing to know about this is that strings are immutable in Go - each time a string is assigned to a variable a new address is assigned in memory to represent the new value. This is different from languages like C++ and BASIC, where a string variable can be modified in place. In Go, each time you append to the end of a string, it must create a new string and copy the contents of both the existing string and the appended string into it. As the strings you are manipulating become large this process becomes increasingly slow. In fact, this method of naive appending is O(N2).

The Go strings standard library package provides a Join function that takes a slice of strings and concatenates them. In our case, this requires first building a slice of strings and then calling the function on the slice. Building a slice takes time if you don’t already have one, and we therefore count this as part of the time taken to perform the concatenation in our benchmarks. The final concatenation will be O(N), but building the slice is O(N) (average) and uses O(N) memory.

Here is an example of using strings.Join:

The last method we’ll be evaluating is using the Buffer type from the bytes package. bytes.Buffer implements io.Writer, and can concatenate strings in O(N) time without requiring us to build a new slice.

Here is an example of using bytes.Buffer:

Now that we’ve defined the methods we want to test, let’s proceed to run the benchmarks. I’d like to skip right to the end and start with the winning approach. Then we’ll work back to see how and when this method is best.

And the Winner Is…

Method #3 (bytes.Buffer) is the winner! But not by far, and not in all cases. Here is a graph of how the methods compare in the case with a 10000 strings with a total size of 37kB (small strings of <= 5 characters): 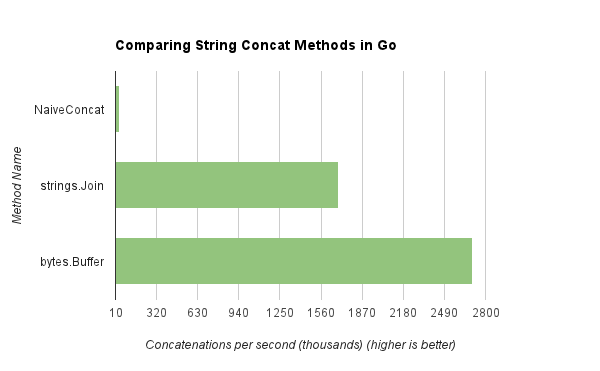 It shows how bytes.Buffer is the winner by quite a large margin in this case. Let’s see how the methods compare when the strings are a bit longer, at a total size of 244kB (25 characters each): 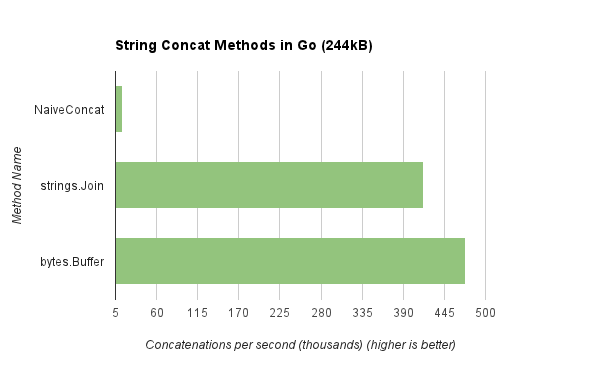 With longer strings strings.Join doesn’t perform so badly, but it’s still not as good as using bytes.Buffer.

Lastly, how big of a factor does building a string slice play in Method #2? We can exclude slice building from the strings.Join benchmark, but make it still call nextString on every iteration so that the tests remain fair. In this case, the results look like this: 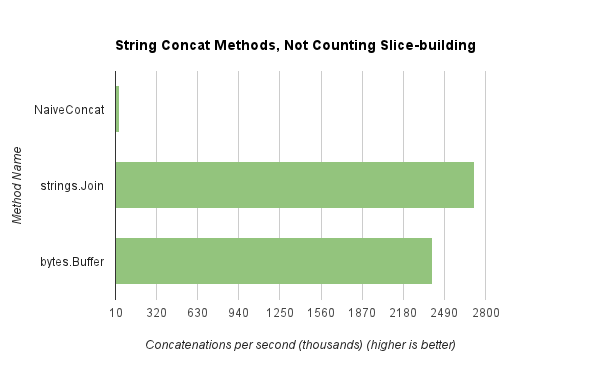 When we don’t count the time it takes to build a string slice, strings.Join edges out bytes.Buffer and rules supreme.

In summary, for very few concatenations of short strings (fewer than hundred, length shorter than 10), using Method #1, naive string appending, is just fine and can actually perform slightly better. For more heavy-duty cases where efficiency is important, Method #3, bytes.Buffer is the best choice out of the methods evaluated. That said, strings.Join is a good choice when you already have a string slice that just needs to be concatenated into one string.

Below are the raw results of running go test -bench. for the different methods and different number of concatenations on my machine (Go 1.2 on Ubuntu 64bit, Intel® Core™ i7-3667U CPU @ 2.00GHz):

You can play around with the benchmarks, run them yourself and check my implementation on Github. A typical benchmark looks like this:

I’m a software engineer working on NLP and Machine Learning applications in Go. I like writing about Go, software engineering and languages. If you liked this article, feel free to reach out on Twitter; over there I’m known as @ironzeb. I’m currently working on my first book, Production Go, which contains lots more insight into writing effective Go.